The Rugby World Cup begins this Friday and the usual build up of articles is already upon us (in Ireland and the UK anyway…) A story about New Zealand’s Richie McCaw caught my eye that is worth sharing. 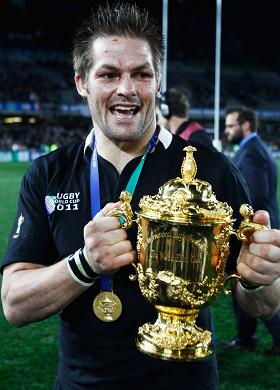 A story about New Zealand’s Richie McCaw caught my eye
that is worth sharing.

Last month McCaw because the most capped player in rugby history
and his team are one of the favourites to win the tournament.

When he was 18 his Uncle asked him if he wanted to be an All-Black?

“Let’s map out how you become an All Black.” , replied his uncle and
he got a pen and a paper napkin and started to write out specific goals with
timelines.

With all the goals written down, his Uncle gave him the final challenge.

The teenager agreed. “Of course.”

His uncle pushed the napkin across the table
“Now sign it, and sign it Great All Black.”

This was a step too far for the young man but his uncle wouldn’t back off.

So the teenager ended up signing the napkin “Richie McCaw G.A.B.”

And he wouldn’t back off his nephew until he did so.

And that phrase has remained with Richie McCaw throughout his career.

He always asks himself ‘What would a Great All Black do?’

And the answers lead to a different quality of action.

1. Maybe it’s time to aim for Great and ask the question ‘What would a great me/us
do in this situation/job/business?

2. Maybe we all need to start writing our goals on napkins…:)

Competition Winners
Winners of the recent competition were announced last Monday.  You can see a list
of name here