Home / Blog / What Men Can Learn From Women About Business (& Life)

What Men Can Learn From Women About Business (& Life)

When I was 24 I found myself in the middle of a personal breakdown. I was lucky enough to be able to work through it and come out the other side 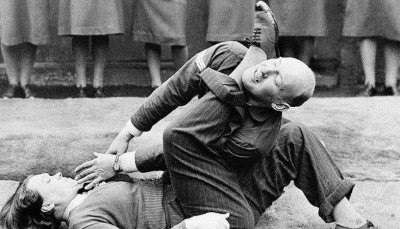 When I was 24 I found myself in the middle of a personal breakdown.

I was lucky enough to be able to work through it and come out the other
side stronger than I went in.   To say I became obsessive about personal
development and anything that would help me grow as a person, is an
understatement. During that time, I decided that I wasn’t assertive enough
and needed to develop my skills. As it was 1995, there were only assertiveness
classes for women. Nothing for men.

I turned up at a local community college on enrolment night and made
my case to the class tutor. I can still remember the perplexed look on her
face trying to explain to me that the class was only for females.

I still can’t explain why, but I felt I just had to be on the course,
so I kept countering her objections. ‘

I’m assuming you role play scenarios for women on your class, to help
them practice being more assertive’, I said to the teacher. ‘

Of course’, she replied.

‘And I’m assuming a lot of the situations they’ll want to work through
will be with men.’

Well why don’t you make me token male for your participants to
role play with?’

When a smile broke on her lips, I knew I had her, even though she
insisted on asking the class first if it was okay.

Over the next 6 weeks, I learned the skills of assertiveness with 30 women
of all ages.  On a personal level, the course was great but being the only
man amongst so many women was, for me, like seeing behind the curtain
of the Wizard of Oz.

I remember being shocked at the way they communicated with each other.
They were vulnerable in a way that I’d never seen men be.  They opened
up about very personal things and they supported and encouraged each other
in their growth. I can honestly say that ego just wasn’t present in the room.
I also remember being shocked at some of the things they wanted to say to
some of the men in their lives!

I’d never really thought about how different the sexes really are until that
class. And it was something that has stayed with me over my career and life,
and in particular help me develop my own communication and leadership
skills.

Here are just a few of the things I’ve learned from women: (bear
in mind I’m speaking generally and about feminine traits as opposed
to every woman having these traits).

Women, in my experience, are generally quicker to admit weaknesses
than men. When together, most women are more open to being vulnerable,
and this brings something to everyone else in the room – a recognition that
everyone needs help, regardless of how many achievements they have.

I recall being at an event in Dublin a few years ago where 99% of the
room was full of women and the main speaker was a female CEO. She
opened up her talk by saying that when she was first offered the role of
CEO, she doubted herself and said she’d only take the role if she was given
a coach to help her adapt quicker.

This woman is recognised as an international leader and is not short of
confidence and ability.  I know for sure that it would be a rare business
event where you’d ever hear a man admit the same thing.  Having a coach
for many male CEOs or senior executives is still seen (by them) as a sign
of weakness.

In an increasingly connected yet uncertain and changing world, collaboration
is cited as an essential skill needed in the modern business world.  Women
tend to put a higher emphasis on relationships and are in many cases less
competitive than men with the people around them. Men can also often hold
unnecessary grudges in business and it usually takes a woman to help him
see how unnecessary it is (although they’re not immune to it either)!

Women tend to intrinsically place a higher value on relationships and
communication and will often bring a more grounded view of conflict
situations, negotiations and perhaps what really matters most.  Men do
value relationships but often many only truly see the real value when it’s
too late and irrecoverable damage has been done.

In general, I’ve found that women are better listeners than men because
they usually pick up on the emotional elements of an interaction i.e. not just
listening to the words but the meaning and emotion behind the words.

I joke with clients sometimes ‘Do you want me to listen like a man or like
a woman?’  In general, men listen with the mindset of ‘How do I fix this?’
and immediately start offering solutions to problems which can drive
women crazy.

Women listen more often with the mindset of ‘I’m just going to listen and
let the person get it off their chest.’  To me listening like a woman, means
letting the person just talk with no judgement or suggestions of how to fix
the problem.

Ironically, the challenge of the Digital Age, is that women and men are going
more and more into their heads and we’re in danger I believe, of compromising
that natural feminine trait of genuine listening – which comes from the heart.

A female client of mine recently used the L-word in a boardroom environment
and it caused major ripples. I salute that kind of courage – because it’s what’s
needed in our world.  (The L-word? Love.)

So have I abandoned my male colleagues?

A man reading this article may rightly argue that women have learned a lot
from men and I also believe that to be true.  However I wonder how many
women have sacrificed their true feminine traits to fit in?

To me, the business world and society at large will benefit hugely from
developing more feminine traits such as those above.