Walking Alone Vs. Following The Crowd

“The one who follows the crowd will usually get no further than the crowd. 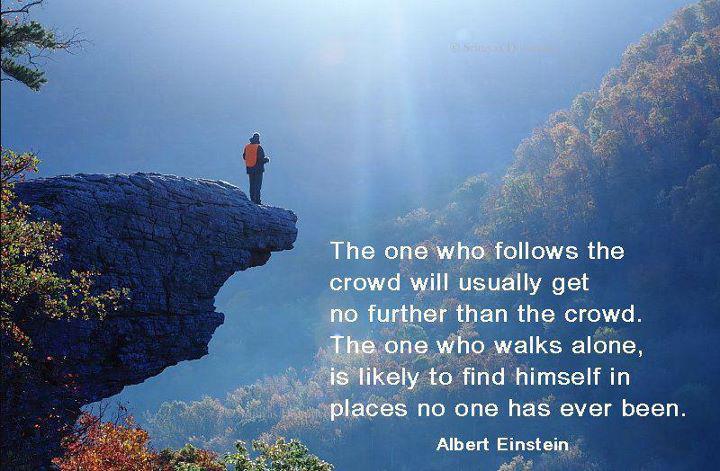 “The one who follows the crowd will usually get no further than the crowd.
The one who walks alone, is likely to find himself in places no one has even been.”
Albert Einstein

But in truth, we are all influenced by the crowd in subtle but hugely powerful ways. This
influence can manifest itself in our inner voice holding us back from action.

Can you step out from the crowd and have the courage to take the road less travelled?

It’s a catch 22. Not following the crowd means that you have less certainty and perhaps
higher perceived risk. Following the crowd gives you a degree of comfort and security. But
what if the crowd is walking towards a very severe drop over a cliff?

Most people and companies make the mistake of comparing themselves to their friends, peers
or competition.

All that happens then, is that we get more of the same and keeping up with the Jones’
syndrome. And less originality.

The world needs more people who have the courage and bravery to walk alone – to tune into
their inner voice that says ‘I’m going to walk this way’.

The irony is that most people in crowds are longing to find someone they can follow who’s
taking that walk alone.

I know I’ve struggled with it like others – but every time I’ve taken the steps to walk alone, the
rewards have been ten-fold.

Where can you follow your own voice rather than the crowds?

Attend my BluePrint Business 1 day workshop on 17th Feb: I’ve been asked to run
another workshop on the 17th February in Dublin – just for business owners and self-
employed people. (I won’t be doing another one for the coming months).
I often hear people say that they are too busy to take a day out like this. My counterargument
is that if you can’t take one day out to think, strategise and plan then you really need to re-
think your business!

This unique workshop creates the space and structure for your to create a plan for the year
ahead in the context of a bigger vision. You also get a chance to hear ideas from like-minded
people. It’s a high value day that will energise and focus you. All details here.